Where the soul is

Top > Articles > Where the soul is

A Vessel of Soul 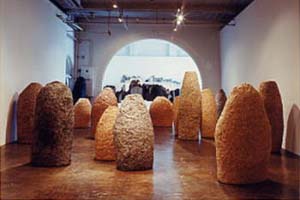 “The Human body is after all a vessel of soul”, Reiko Nireki says. The word “soul” rather than “mind” sounds somehow solemn and nostalgic. I am not so concerned about the naming, but I am sure she also has a reason to say simply “vessel” Nireki has abandoned figurative sculpture which would be empty powered by imaging a soul residing in the figure. Her idea of a body and a soul also differs from the concept of soul as the master of the body in ancient Greece and that of the body as a graveyard of the soul or a shell which protects the soul.

Although the Ancient Greek philosophers considered an invisible soul more realistic than the vanity of a visible body, the comparison of reality and vanity is not important in as far as both body and soul are used as metaphors for a human being. However, the theory of a human body as a mechanism might still have some significance. According to the theory of Descartes, the body as an ancient clock might experience a death somewhat like the stoppage of its clockwork.

I happened to see such samples of death at the exhibition “Human Body World” in the National Science Museum. The epoch-making installation using a human body with its fluid taken out and filled and hardened with a kind of plastic, revealed the mechanical device packed under the skin in the body so vividly. It made me realize that there is an intimate relationship between the theory of the human body as a mechanism and the human organ transplants of today. No matter how much La Mettrie following Descartes tried to connect a body with s soul by modifying the clockwork into a mechanism which works by itself, the body remains a mere function until we deal with the primary cause of life.
Contrary to the above mentioned human specimen, Nireki’s “vessel” is empty without the inner mechanism, and is literary a mere vessel or a surface skin, neither moving nor being still between existence and non-existence. Her vessels have the content of a soul or a substance which is inseparable from the body, or the body itself. However, Nireki has never referred to the word “body”. For Nireki, who is a formative artist to think means to create figures which are extending and spatial. The vessel where a soul resides is not a mere signal but rather the substance itself.

The artist has departed from figurative sculpture because she could not find a meaning in the skills which merely imitate the human body. Later, she moved to Europe and resumed work on figures with organic materials, which she had previously intended to do. At that time Nireki again encountered nothing but human beings. Now, she is encountering human beings constituents of nature and society, who inevitably get involved in their environment and repeat the cycle of birth and death. A human being who is an individual is also a part of a herd at the same time. Nireki’s expression in not a single figure nor does she indicate its condition. She questions the way it is rather than the reason for its being.
You might imagine the works of Abacanowicz, especially the group of human backs, made mainly of linen. These figures apparently carry the grave history of the artist’s home country, Poland. Recently, a more severe and delicate theme called “war game” has been added to her works. However Reiko Nireki has not experienced the war. She was born and raised in Japan after the war. Recently, she returned to Japan from England and also Germany. Nireki has looked into the material of her own language in order to express her personal experiences in various places. She recognized it directly in the form if her works.

She encountered jute linen in London and developed that encounter, modeled on an iron structure. In Japan she engaged in the time-consuming task of pasting recycled paper onto a bamboo model shaped like a bomb. These acts have been nothing to do with so-called ecology. Rather she has been searching for the common wave length among the souls of different histories and cultures.

In the end, the soul takes on the style of a metaphor. However, at the same time the style is a structure of the mind which has been taken out (said Shuich Kato), then the soul of a different structure takes on a new style. The vessel made by Nireki is a visible style of a style-less soul. There is no doubt why the artist calls it a mere vessel of a soul based on her feelings about the limited life span of human beings. It might also reflect upon the hastiness in Japan. Nireki’s real wish for her vessel of a soul is a natural being which fills the space like an echo from a distance, regardless of life and death.