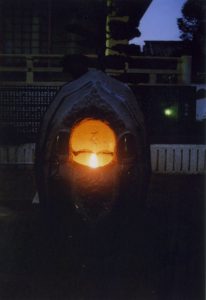 I received a request to make a monument in the summer of 2011, from an organization for denuclearization.

The organization keeps the fire from the atomic bomb that was dropped on Hiroshima.
Anti-nuclear power generation awareness of the nation increased since the Fukushima accident on March 11th. 2011. I thought how I should put their message into the monument. I decided to make a stone sculpture with which we can pray for nuclear disarmament and peace – two hands are holding the fire from Hiroshima atom bomb until there are no more nuclear weapons or power stations in the world.
I was praying for “peace” and carving stone.
It has become a wonderful work because the artist Mr. Hiroto Sakamoto worked together with me. I carved the Buddhist word “きりく” behind the fire which means “Give light to all people “, an idea from monk Isshin from Torinin Temple where they keep the monument.
At the moment when the work was completed, I was eternally full of gratitude for the people who gave me the chance to create this monument.
I am praying that the “Light for Peace” emits our infinite energy of hope for peace in the world and the Universe and sends a message of nuclear disarmament.

I thank all the people who co-operated with me in the production of this monument.