“Ceremony of the God of Tree”

In Taiwan, there are gods of the land, called the Earth God, as well as the gods of the trees, called the God of the Banyan tree or the God of the Bishop Wood.
“Ceremony of the God of Tree” is a Taiwanese traditional belief of adopted son and daughters where a child imitates a parent-child relationship with the god of tree until 16 years old to improve his/her future.
Mid-autumn festival of the lunar calendar (September 19th. 2013) is believed as the Tree Gods birthday, and children receive new lucky charms on that day and go to pray carrying a lucky charm made of leaves of bishop wood and banyan tree, and coins.
This means children receive the Tree God’s vitally, and (the family) wishes for the children’s well-being.

Since 2008, I’ve been working on my “Forest and Tree Project” in which I visit the tree(s) that Japanese people are protecting out of religious belief as well as the ones with a significant meaning in our (their) daily lives.
I’ve been creating art works, while finding the theme and image for my works, by visiting sacred trees and gigantic trees, learning about legends, customs and rituals surrounding the trees and learning how deeply our ancestors had been connected with the forest.

Since ancient times, natural objects such as mountains, forests (杜 mori), giant rocks and trees have been objects of worship in Japan, and Japanese people have believed in animism – that gods dwell in everything, even a single rock or a tree.
I became interested in nature protected by this belief, and have been creating my works themed around village’s sacred groves and sacred trees.
“ 鎮守の杜”“Chinjyu no Mori” is the grove of trees surrounding the village shrine. The Shrine is a sacred place to appease the gods when the come down to the village from mountain of god. The shrine grove (杜、mori) has a different meaning and role from the every day forest (森、mori). A sacred tree exists in every shrine grove and the shrine was built around the location where the old giant tree existed. Japanese history shows the fact that people worshiped the scared tree as a god and wished to preserve them.

After visiting Taiwan several times for exhibitions and as an artist in residence, I became interested in Taiwan’s rich nature and it own unique folklore culture, as well as how nature was protected over time. By focusing on the protected and preserved trees, I expect traditional customs and natural environment which in some cases has been lost, will be brought to the fore.

Question:
Do you have any trees considered as a sacred tree, Wishing Tree, the God of Forest, or the God of the rice paddy in your town, village or hometown?
Please let us know if the tree(s) have any stories, customs and rituals.

Does your family or ancestry cherish any special tree(s)?
Please let us know if the tree(s) have any stories, customs and rituals.

Although we asked these questions via Museum of Contemporary Art Taipei website since May 2013, unfortunately, we didn’t receive any personal answers as of now.
I was fortunate to have the chance to visit the sacred and old tree(s) in central-south part of Taiwan in June, 2013, thanks to the Taiwan Forest Bureau’s support. Even though it’s a short time, I learnt about some differences in perspective on nature and belief between Japanese and Taiwanese people. Based on this trip, I started to create my works while staying in Taipei International Artist Village Grass Mountain Château from September 1st and visiting more sacred trees and temples.
During this trip in Taiwan, I witnessed some old trees damaged by urban development and air pollution coming from cars. Others were even dead. I still can’t forget the scene where a sacred tree was covered with concrete and heavy grim and dirt at the bottom, which seems to me nothing but a burden for this old tree.

Once lost, we will never be able to get back nature in its original form. According to European and Celtic tradition, there exists a tree which can make people’s wishes come true, called a
“Wishing Tree”.

The time has come to make us listen to what trees and nature have to say, don’t you think?

Although I’m still in the middle of the creation process for this exhibition, I felt I wish I had more time to learn in Taiwan this time.
There may be a limitation for this individual artist to visit and meet trees however she tries.

However, I wish from the bottom of my heart that individuals whom I will meet via this project, and my exhibition at Museum of Contemporary Art Taipei, will become interested in a sacred tree and old tree around them in their daily life, which will lead and spread “the sense of nature conservation” wider in Taiwan.

On the last note, I would like to express my gratitude to MOCA Taipei and those who helped me with this project and my creation. 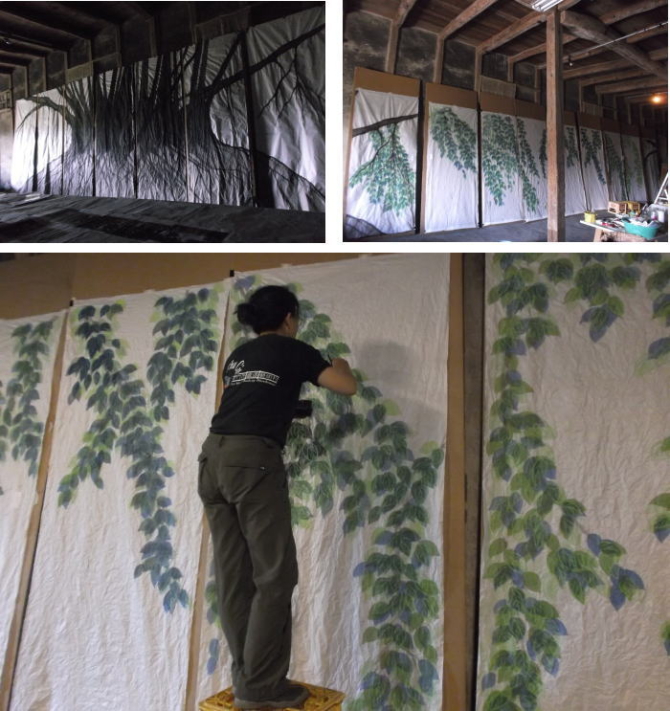