“Three Trees” is an important art project showing us both the strength and the vulnerability of nature. Three artists from Japan and Finland share the passion and enthusiasm in forest, trees, the state of nature. How contemporary people live with nature, how they appreciate it, and how they also destroy it-maybe the “Three Trees” will give some indications on these issues. The artists join forces with local people to find out what still fascinates in the secrets of nature and what does it still tell for us. 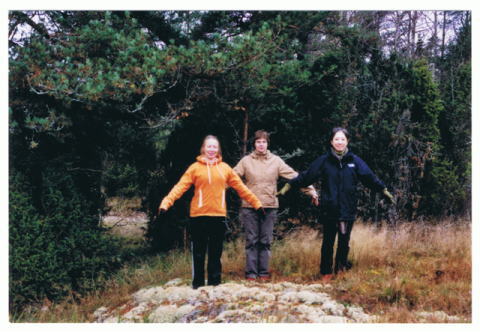 －Summery－
Artist Reiko Nireki worked in Finland for one year from 2000-2001 funded by scholarship from the Agency for Cultural Affairs in Japan. She started a cultural exchange program with artists that she met during her stay in Finland. The exhibition 「Both Sides-Funi」was held at Espoo city museum, Finland in 2003,
C.A.P. HOUSE in Kobe city, Japan 2004. They were very successful.
Photographer Sanni Seppo and Ritva Kovalainen joined Reiko Nireki in Kobe city, Japan for the exhibition 「Both Sides-Funi」held at C.A.P. HOUSE (The Conference on Art and Arts Projects, a non profit organization) in 2004. These three artists intend to start the project “Three Trees” in April 2009, inviting Sanni and Ritva to Yoshinogawa city, Tokushima prefecture where Nireki is based, to do research for the project take photos at the forest, which will be developed into future activities and exhibitions.

－forest people－. It is important to them to spend time in nature during their holidays.
For a long time in their history, people’s lives and the forest were closely intertwined and could not be separated. As in Japan, nature was worshipped through Animist practices and people believed in the existence of spirits in the forest. In rural areas, village or houses had sacrificial trees. However the propagation of Christianity came into the country beginning in the 12th. Century, many of these holy trees were destroyed. The process is shown in their book “ Puiden Kansa (Three People)”.
Now, the forests in Finland are destroyed because the natural forests have turned into a resource for the pulped paper industry. For the past 15 years, Ritva and Sanni have shown in their projects “Three People” and “The End of the Rainbow” that the natural forest can never be returned to its original state after it has been destroyed.
Recentry their projects have drawn a lot of attention because of the related problem of global warming
Nireki felt there is a similarity between Japanese and Finnish ideas about nature, and how it is an integral part of people’s lives and customs. For our project, we would like to compare and contrast how people in both countries protect and preserve nature in their lives, as seen through the eyes of an artists.

The “Tree People” Project by Sanni Seppo and Ritva Kovalainen was the very first exhibition I saw in Finland where I stayed for one year on scholarship by the Agency for Cultural Affairs Japan in 2000. It was such an impressive and empowering exhibition of their photographic works that made me believe that someday I would take this project to Japan. It all started there.
Three years later, we made our first exhibition “Both Sides-Funi” held at Espoo Municipal Museum in Finland, and brought it to C.A.P. / The Conference on Art and Art Projects in Kobe, Japan, in the following year, 2004. Here I am grateful to present our project in Tokushima, Japan, holding an exhibition of art works of three of us using
“Awagami”, the local produced Japanese “Washi-Paper”, and we will present an Artist Talk, lectures. Besides those events during this period of our stay in the “Kamiyama Artist-in Residence Program”, we will work on the research and photo sessions on the history and the present environment of the local mountains and sacred forests. The fruits of this project will be continuously presented to the public in both Finland and Japan in the future.
I would like to add a few words of heartfelt gratitude to the local people who supported our project throughout.